There’s a couple of things that I’m really excited about at the moment and one of them ties into my last post in which I mentioned that I’m really interested in Japanese culture. As part of that interest I enjoy listening to Japanese pop music (not that I can actually speak or understand Japanese) and my favourite Japanese singer (actually my favourite singer full stop) is Kyary Pamyu Pamyu and she is coming to Australia! She will be performing in Sydney and Melbourne on the 24th and 25th of June respectively and I will be going to her Melbourne concert. Despite Kyary Pamyu Pamyu being compared to Western artists such as Lady Gaga and her music video for her song “Pon Pon Pon” going viral, I still get a lot of confused looks when I mention her. People also wonder at how I can enjoy songs that isn’t even in English. Although I do enjoy the meaning of her songs (I look up the translations on http://kyarychan.tumblr.com/kyarylyrics) that is just a small part of why I like her. On a whole she kind of represents everything that I like about Japan and everything about her music and music videos just makes me feel happy.

When I say I like Japanese culture I like both the modern aspects of Japan, such as pop culture and the more traditional culture. I really admire how Japan as a country seamlessly blends the two. Although I have never been to Japan I have read a fair bit about it, for example Tokyo is known for being ultra modern, yet it still has many beautiful shrines and temples. Kyary Pamyu Pamyu’s music and music videos demonstrate that same blend between the old and the new.

Kyary’s song “Ninja Re Bang Bang” (see above) is a clear example that combines the use of (what sounds like) traditional Japanese stringed instruments with modern digital music. In the music video she is wears a ninja outfit and a kimono, however these are accessorised by many contemporary elements such as the heads of Barbie dolls and speech bubbles. Other modern elements include dancing robots and Kyary having her arm transform into a laser gun. Her other songs, outfits, dances etc. pretty much all combine at least one traditional aspect along with modern influences.

Possibly the biggest reason why I like her music is that I can’t listen to it without being happy. They have such bubbly, cute, pop sound to them along with her adorable voice make me feel nostalgic for children’s music. I think we kind of live in an age full of nostalgia with that many movie sequel and remakes and with anything old becoming “vintage” or “retro”. It’s cool  to like things that are old and personally I find that today’s popular music is (almost) always about getting drunk or partying, which is part of the reason that I turned to Jpop in the first place. Kyary’s songs can be about as something as innocent and cute as: not wanting to go to school, enjoying candy, wearing false eyelashes, missing out on the last ice cream etc.

Despite having Japanese lyrics the choruses  are always easy to sing along to, often incorporating English words with the Japanese. I’m actually so excited about Kyary’s concert that it’s motivated me to teach myself Japanese using a Nintendo DS game I have.

So here I’ll leave it with a picture of Kyary Pamyu Pamyu that I drew myself: 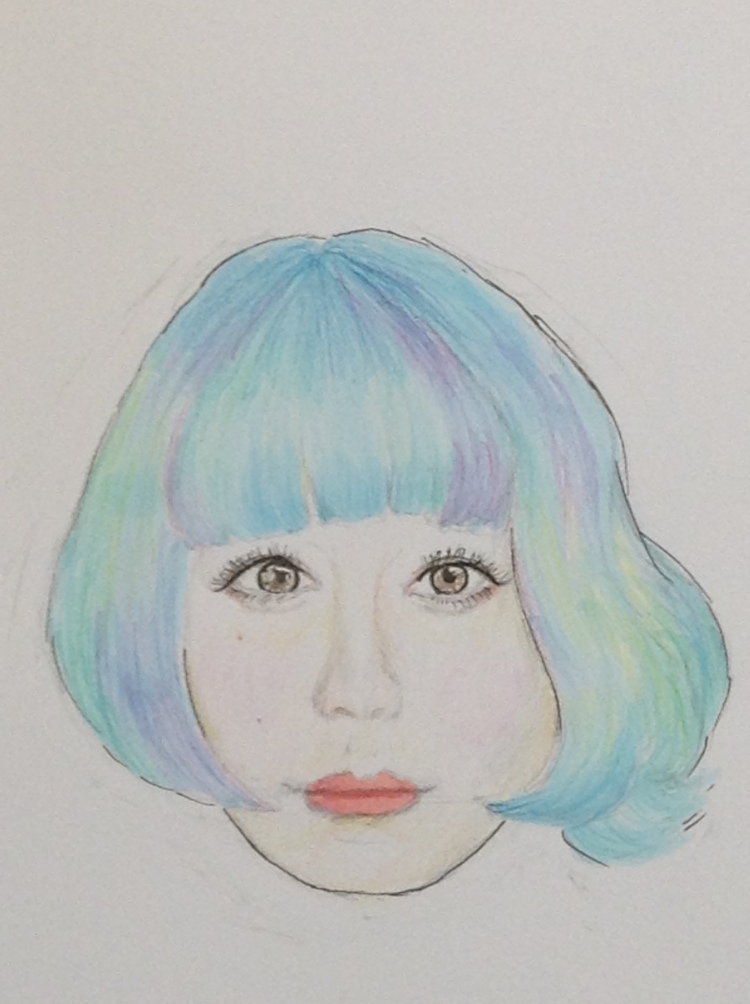