I’m starting to realise I’ve got a lot more international readers, so I guess this is a post to give you a glimpse into the Australian way of life.

So I live in Victoria, which is Australia’s second most southern state. Where I live we get bush fires and snakes in summer with the occasional bit of snow in winter. Unlike in Melbourne or other more urban parts of the state, I actually get to see kangaroos outside my backdoor as well as other native wildlife. 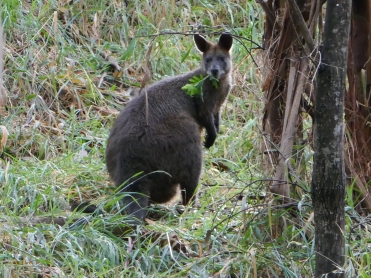 Most of the conventions I go to (such as Anime Festival and Animaga) are in Melbourne. For me I have to take a two hour train trip to get there often while wearing my cosplay.

There are local cosplayers near where I live, but there isn’t enough of us to create a convention as big as the ones in Melbourne. I personally find being a country cosplayer harder because all the best places to get cosplay materials are either in Melbourne or online. It is however a great place to be with respect to cosplay photography locations. I live about one hour’s drive away from both the snow and the beach, which are both awesome locations for photography. It is however always more fun with other cosplayers which is why I love conventions and festivals so much.

Honestly though I never want to live anywhere else. I would love to visit other places, but I never really want to leave Victoria.

If I lived somewhere else I may never see such touching scenes of motherhood/childhood again.