The difference between costume and fashion with special guest Rosie Roulette

The trailer below is for one of my favourite anime. I admire the clothing style of the main characters. If I wore an outfit similar to these characters would it be lolita fashion or would it be cosplay?

The answer depends on the purpose of my outfit and how accurate I want to be. According to Rosie Roulette the basic difference between anime, cosplay and lolita is:

It seems simple enough, but how do you tell the difference, especially when some anime characters wear what looks like lolita fashion?

If you’re intending to replicate the exact outfit then it’s cosplay, but if you’re simply taking inspiration from an anime then it’s fashion. For example this gothic lolita makeup tutorial is inspired by:

Inspiration for lolita can come from anywhere. It doesn’t have to be from anime. If you like bats or cats they could inspire your lolita fashion style. Safiya Nygaard is not a lolita, but when she tried out lolita fashion for the first time she chose things which fitted her ‘normal’ style and/or interests.

When I observe Rosie Roulette’s lolita outfit, she wore when I interviewed her at the Japanese Summer Festival, I noticed there’s a clear theme. If I could sum up the theme in a sentence it would be: ‘Magical, snow white kitten playing with pastel pink ribbons and video games.’ Having an outfit theme is different to trying to replicate the outfit of a fictional character. 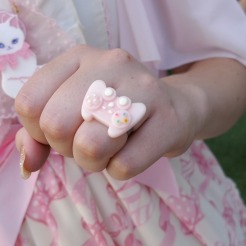 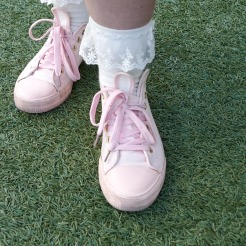 While in these photos she is not cosplaying, she does have a lot of experience in that area (see this blog post for her Harley Quinn cosplay). To the novice onlooker lolita can look like a costume the same way cosplay is, one of the key differences is behaviour and attitude.

“So with cosplay there is a role playing element most people get into to some degree. For most people it’s just a simple posing in a certain way or photos, posing like the character. Other people will go further, by acting like the character the whole time they are in the costume. It’s like a whole performance in it’s own way.” -Rosie Roulette 2020

Cosplay is about being another character. For example the costumes in the cosplay video below may look like lolita fashion, but in reality they are cosplaying dolls from an anime.

Now that character could be similar to you in some way or even wear similar clothes to you. The big difference if who you’re trying to be as Rosie explains:

“With fashion you’re not performing someone else, you’re trying to be yourself through clothes.” -Rosie Roulette 2020

As a performer in many art-forms Rosie doesn’t just use lolita fashion to express herself, but also other alternative fashion styles. She is one of the people who run the Harajuku Fashion Walk Melbourne, which welcomes all types of Harajuku fashion – not just lolita.

Whatever fashion style/s you prefer it’s just a way to express an aesthetic you like. Rosie and I discussed our experiences of wearing lolita fashion. For me wearing loltia fashion is about letting the kawaii side of me out. Rosie has a similar experience with respect to fashion. I personally believe she wears a variety of fashion styles to express different aspects about herself.

When she cosplays, for example Harley Quinn, she is still expressing herself through her clothing. The difference here is it is a costume.

Cosplay and lolita fashion both involve wearing a particular style or look to express yourself. The key difference who you’re trying to appear to be. Are you trying to be yourself, but expressing it though lolita clothing styles? Or do you admire or like a character so much you want to look like them through a costume?

Hopefully next time you go to the Japanese Summer Festival (or other such event) where people wear yukata, lolita fashion and cosplay you will know the difference. If you want to know more about Rosie Roulette or the Harajuku Fashion Walk Melbourne you can contact her on Facebook here.